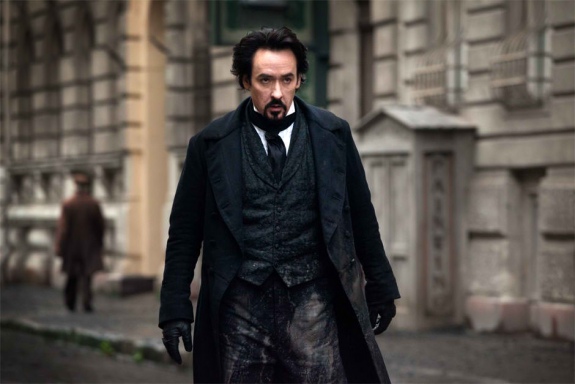 Yesterday, I mentioned that I've fallen behind on posting movie reviews. As promised, I am posting one this evening. To make it easy, here is the most recent film we watched. I must preface this review by stating that I intended to see The Avengers on Friday night, but every show was sold out. We settled for The Raven when we learned that The Pirates! Band of Misfits was only available in 3D. Both Susan and I were curious to see The Raven, but it wasn't a must see at the theater.

During the days leading up to Edgar Allen Poe's death, Baltimore was became a setting for brutal murders inspired by the author and poet's gothic writing. Was Poe, who was mired in a writing slump, attempting to perform his greatest masterpiece by acting out his greatest works of fiction? Was there a copycat killer on the loose who was inspired by Poe's grim tales? Following a series of murders in Baltimore, Poe's girlfriend, Emily, was captured. Clues based upon Poe's fiction could ultimately lead the author and the authorities to the missing woman.

I enjoyed the setting and clothing. Throughout the film, it genuinely appeared how Baltimore could have looked in 1849. The action was paced well and it flowed smoothly. The music in the film seemed to fit, too.

Where do I start? First of all, the film falls along the lines of speculative fiction. Not quite like Abraham Lincoln, Vampire Hunter. Still, this is a fictionalized story based upon loose facts from Poe's final days. Accents would come and go. There were even scenes were Poe (played by John Cusak) would run and leap over obstacles. At times, I expected him to rip open his shirt only to reveal Superman's suit beneath.

This story has been told before. Honestly, the film it reminded me of was Copycat (1995). In that movie, authorities analyzed The Police song, "Murder By Numbers" from their 1983 album Synchronicity. All of the clues were there. They just needed to listen closer. In The Raven, all of the clues were in Poe's prose.

I generally don't comment on the closing credits, but I think this film's credits deserve a mention. The movie and animation during the credits didn't seem to fit with the rest of the film. When the credits began to roll, I thought that they fit better with a Marvel release. Perhaps The Avengers.

Overall review: 2 out of 5 stars