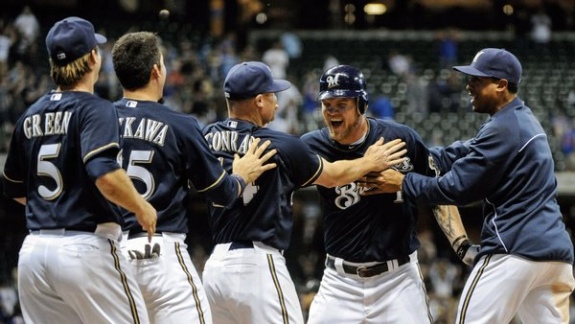 It wasn't the best game I've attended, and it certainly wasn't the most important game I've seen. But, last night's five-hour-plus, 13-inning affair featured a whole lot of craziness. Was it a pitching duel? Kind of. Was it a slugfest? Sort of. Was it pretty? Absolutely not. After all, what else would you expect from two teams buried at the bottom of the National League Central?

During the bottom of the first inning, Aramis Ramirez grounded into a 5-4-3 double play that scored Nyjer Morgan from third base. The Milwaukee Brewers grabbed an early 1-0 lead. While certainly not a pitching duel (like these two from last season), all signs pointed to a shutout.

Then, the game took a crazy turn in the seventh. The Brewers brought in Kameron Loe to pitch. With the bases loaded in the top of the seventh, the Cubs sent David DeJesus in to pinch hit for Jeff Baker. Grand slam to the right field bleachers. Being that late in the game, the Cubs grabbed what seemed like a commanding 4-1 lead.

Wrong. In the bottom of the seventh, the Brewers answered with four runs to reclaim a 5-4 lead. Suddenly, an offensive display emerged. In the top of the ninth, the Cubs scored three additional runs. Yes, DeJesus tripled to drive in a run. Did anyone have him in fantasy baseball?

In the bottom of the ninth, trailing 7-5, Corey Hart came to the plate. With one on and one out, Hart belted a two-run homer off Rafael Dolis to tie the game 7-7. Extra innings. Kerry Wood provided two innings of mixed work. While he didn't allow a hit, he did walk three batters. In the process, he dropped his ERA from 14.54 to 9.95.

After five hours and four minutes, in the bottom of the 13th inning, Corey Hart came back to the plate. With the bases loaded, Hart singled to center field to end the game around 12:15 a.m. on Saturday morning.

Those Narron boys know how to brawl with the best of them because they are from the country.