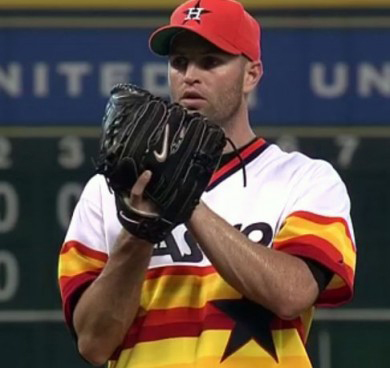 Yesterday, the Chicago Cubs and San Francisco Giants donned throwback uniforms. The two teams turned the clocks back to 1912. Back then, the Giants actually played in New York. They didn't move to the west coast until the 1958 season. The Cubs historically haven't worn throwbacks too often throughout the years. While it was fun to watch them wear something different, it was nothing quite like what the Houston Astros did on Friday night.

This year, the Houston Astros are commemorating their 50th year as a franchise. Actually, they entered the National League in 1962 as the Houston Colt .45s. A few seasons later they changed their name. I'm sure how I missed this, but on Friday night, they donned the "rainbow" home jerseys they wore from 1975-1979. It's fashionable to make fun of those jerseys, but I'll admit, I still get a kick out of them.

The colors were more interesting back then. I liked the 70s Padres uniforms/colors as well. It seems like now almost all teams use red or a shade of blue.

jef, really? Those padres uniforms were UGLY! How about the WhiteSox wearing the softball shorts

oh yeah, I liked that brow and yellow. I don't remember the WhiteSox shorts, but I do like the stirrups and/or high socks with shorter pants look.