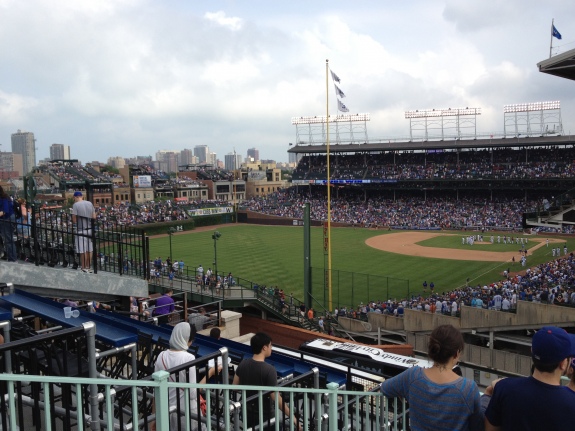 For years, I debated watching a Cubs game from a rooftop across the street from Wrigley Field. Back in the 1980s, the rooftop experience was less formal. People would simply grab a folding chair or two and sit atop their building on Waveland or Sheffield and watch a game from a distance. During the late-1990s and 2000s, towers of stadium seats began to emerge atop those same buildings. Old houses were demolished and new structures were built exclusively to sell the rooftop experience.

Yesterday, I finally watched my first game from atop a rooftop.

I'll confess to having a healthy dose of skepticism about the experience. The guys at my company purchased a Groupon for the Wrigley View Rooftop. This building is located next to the fire station on Waveland Avenue well into foul territory on the third base side. Surely our view would be obscured by the upper deck. Much to my surprise, we could view the entire field of play with the exception of the left field corner. My biggest concern was that home plate would be blocked by the upper deck along the third base side.

The lower level of the building featured a traditional bar with televisions. On the second level they had food and smaller bar. The food consisted of burgers, hot dogs, brats, chips, and more. Atop the building were the stadium seats. We didn't have access to the skydeck, but honestly, it simply looked as if it was just a place to stand.

The view was better than I anticipated. The food was adequate. Not quite as good at some parks, but much better than inside Wrigley Field. On top of that, the food and drinks were unlimited. If you do go, bring singles for tips. I only had larger bills and they could provide change until much later in the game.

One major portion of the experience did bother me. I felt disconnected from the game. While it's fun to socialize at games, I am there first and foremost to watch the game. Yes, I could see all of the action. The rooftop even featured speakers with the television broadcast audio. The 10-second delay was awkward, but completely expected. Listening to "Take Me Out to the Ballgame" in the round was unusual to say the least.

I'm not sure I'm in a hurry to return to a rooftop, though I'm sure each one has something unique to offer. When I attend games, I prefer to sit inside the park. I like being closer to the action. While Wrigley Field is not perfect, it still allows fans a much closer experience than other parks. 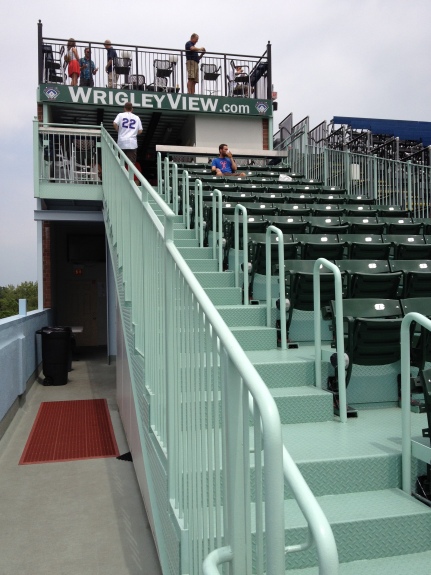 What is a hot hog? I imagine that you were pretty warm upon the roof weren't you?

Oops. I meant hot dog. Yes, it was warm and humid.